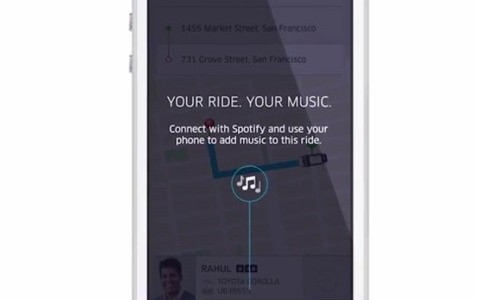 Here’s how it works: You, the Uber user, summon a car to your destination. If that vehicle is enabled to link, you’ll see a window inviting you to program music for your ride. So theoretically, you could walk from your front door listening to Spotify on your smart phone and then continue that same song in surround sound from the comfort of your Uber car.

It remains to be seen how many people will be comfortable in their own playlists to share their secret love of Neil Diamond with an Uber driver. And I’m sure some will be tempted to program Milli Vanilli as payback for all those years of being held hostage in midtown cabs listening to angry talk show callers shouting in foreign tongues.

But for the backseat party girls doing their Friday night club hopping, this Uber-Spotify marriage is a natural, leaving the poor Uber driver stuck in a high-decibel debate over how much Pink is too much Pink.

AM/FM broadcasters aren’t likely to lose an appreciable share of listenership, but there is an unintended ripple effect that could be caused by this new technology.

Take Bill the Uber driver, bopping along to Clapton on an FM Classic Rock station when a couple enters his car. Should any of those three persons be wearing a Portable People Meter, that FM station would get credit for receiving the RF signal that tags along with the music. But if that same couple enters the Uber vehicle and programs their own music on Spotify, they would no longer become “accidental listeners” to the FM station – and Bill the Uber driver would no longer be counted either. Uh oh.

It’s not the fall of the Berlin Wall, but it is one more, tiny chink in the once-impenetrable armor of AM/FM radio. Just as the ABC, CBS and NBC television networks now share audience with thousands of alternate broadcast, streaming and on demand forms of entertainment, terrestrial radio will now sacrifice another sliver of audience share to this new Uber-Spotify partnership.

I, for one, look forward to the novelty of entering an Uber car listening to Brian Auger’s Oblivion Express or something equally left-of-center from my personal playlist.