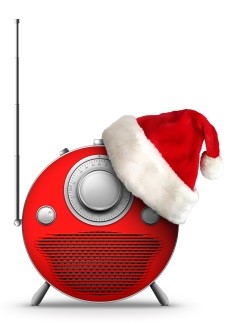 Every year, typically around mid-November, something happens. Radio Stations across the county flip their everyday format to Christmas radio. Why do they do this? To spread Christmas cheer? Not exactly. The real reason behind the switch can be found in the ratings, which have been known to double.
In the case of WEZW-FM in Cape May County, the daytime ratings historically increase from 87 percent up to 129 percent and have reached a 582 percent increase on Christmas Eve, according to a New York Times article. With numbers like this, it’s no wonder more stations are making the switch to Christmas music. In 2004, there were 279 stations in the United States that played strictly Christmas music over the holidays. Last year, nearly 500 stations adopted the seasonal format.
What are the advantages on advertising on an all Christmas radio station? For one, those listening to Christmas music are presumably going to celebrate Christmas. And celebrating Christmas typically equates to spending money. Therefore, by advertising on a Christmas station you are able to reach an audience who will more than likely be shopping in the immediate future. Additionally, Christmas radio often highlights one of AM/FM radios everyday strengths – its connection to local audiences. There will be no shortage of community events and holiday theme contests promoted by broadcasters during this time, which is a great opportunity for a brand or retail location to better establish itself in the community where potential customers reside.
However, if ratings skyrocket for stations that play Christmas music, why don’t all stations make the switch? As with anything, an oversaturated market is not a good thing. Too many Christmas stations would defeat the purpose and it can be tough to compete with the already “established” Christmas station(s) in a given market. Additionally, many stations are reluctant because they don’t want to lose loyal year round listeners for temporary listeners that will go away come January.
Whether you love it or hate it, tunes like “Grandma Got ran Over by a Reindeer” draw in thousands of listeners every day. Can Christmas radio work for you? Contact The Radio Agency and we’ll help you gift wrap a holiday advertising schedule.