Talking to Your Audience 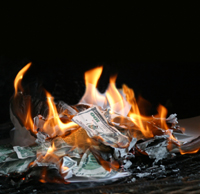 A Canadian radio station is receiving major backlash over a controversial self-promotion.  AMP Radio in Calgary ran a promotion called “Bank it or Burn it” which asked listeners to vote whether they should #BANK C$5,000 and give it away to a listener or #BURN the money. The #BURN option meant that they would literally set the money on fire.  With 54% of the votes, the option to #BURN emerged victorious, and AMP Radio burned C$5,000.

A YouTube video was posted of the station’s morning show hosts throwing the bills into an incinerator.  AMP Radio defended their actions noting that businesses can easily spend C$5,000 on marketing in a week, and that their promotion has garnered a lot of talk, but at what price?  While this promotion received a lot of attention, the vast majority of it came from outraged Calgarians claiming that they would no longer be listening to station. However, that hasn’t stopped AMP Radio from continuing the promotion.  The second phase is currently underway, and this time C$10,000 is at stake.

Radio promotions are a great way to create “buzz” around a brand, but generally speaking enraging listeners is not the way to go.  In addition to radio commercials, radio promotions (like contests and giveaways) are great “attention grabbers” and can help listeners engage with your brand on a deeper level than conventional advertising.  If you are interested in getting on the radio and running a great promotion (that doesn’t make anyone angry) contact The Radio Agency today.  We’ll promote your brand and no one will get burned.

Kristen Quinn is the Traffic Manager of The Radio Agency. Please follow The Radio Agency’s Blog “Sounding Board” by subscribing to the email or RSS links above.Visit our website TheRadioAgency.com